[Interview] CPH:DOX – Tatia Skhirtladze, director of “Glory to the Queen” 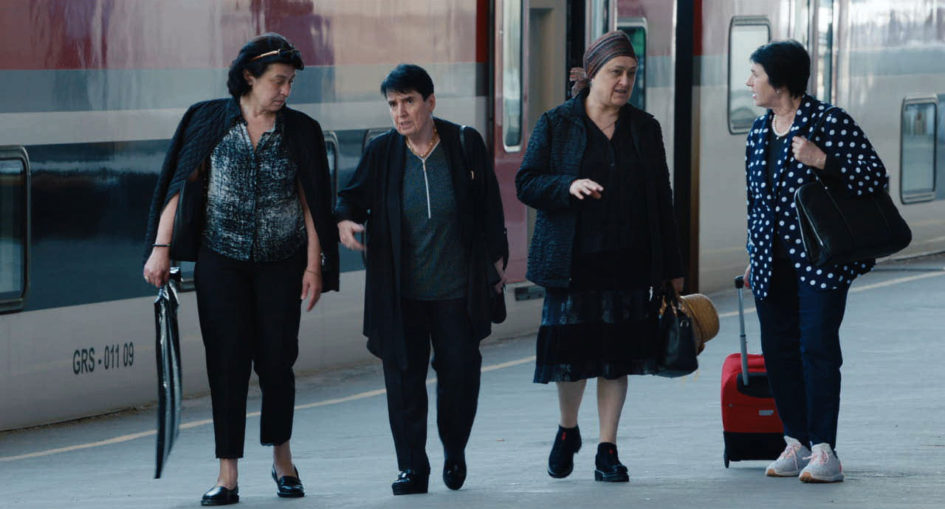 Four of the most famous female chess players in the world, are the main protagonists of "Glory to the Queen".

The Georgian documentary “Glory to the Queen” was presented out of competition at the recent CPH:DOX. The film, directed by Tatia Skhirtladze, retrace the story of four of the most famous female chess players in the history of the game, all of which grew up in Georgia around the same time and competed fiercely for the world title between the 60s and the 80s. The film tells their stories playing for the USSR team alongside Karpov and Kasparov, their experiences as women in competition chess, and their legacy and impact on their home country.

Synopsis: During the Cold War, the four legendary female chess players from Georgia revolutionized women’s chess across the globe, and became Soviet icons of female emancipation. Glory to the Queen reveals their interwoven biographies and is both – a rare look into the present lives of chess stars Nona Gaprindashvili, Nana Alexandria, Maia Chiburdanidze and Nana Ioseliani, as well as a chronicle of their lasting legacy.

Tatia, please tell us about your motivations to approach the story of these Soviet female chess players, and how the idea to make a documentary about them first came to you.

I was born and raised in the Soviet Republic of Georgia, at a time of upheaval and historical transformation during the 70s and 80s. Nona Gaprindashvili, Nana Alexandria, Maia Chiburdanidze and Nana Ioseliani, the four best female chess players in the world at that time were my personal role models. Through them chess became for me a symbol of intellectual and personal emancipation and empowerment.

Having lived abroad in Western Europe for the past two decades, I have observed from afar a lot of regressive and reactionary trends developing in Georgia, especially with regards to the treatment of women.

At some point, an encounter with Austrian cultural theorist Ernst Strouhal, who identified me as Georgian through female chess players and not as usual through Stalin, Soviet Union or Russia, made me think about this much more exciting identification. I started thinking about the heroines of my youth. I wondered what had happened to them. What were their goals now and what happened to their heritage.

Was it difficult to pitch the idea and raise funds for a documentary about these world champion chess players? Given what they represent for Georgia.

Glory to the Queen is a co-production between Austria, Georgia and Serbia. It was not difficult to pitch the idea, as the story of four Georgian female chess players is really unique. After receiving development support from BKA – Ministry of Culture of Austria, Serbian producer Sarita Matjevic (Playground produkcija) was the first one who supported the project. We pitched it at the FEST Belgrade International Film Festival, winning the Women in Film pitch award from EWA – European Woman’s Audiovisual Network and FSC – Film Center Serbia. In parallel, Georgian producer Anna Khazaradze from 1991 Productions approached me to work together (later on, Anna become my co-director). And last but not least, Austrian production companies Berg hammer film, as main producer, and Amour Fou Vienna as senior producer, joined us and within one year we had almost full financing.

One aspect to highlight in your film is the historic stock footage. Was it difficult to access it?

No, because I was supported by prominent Georgian chess historian David Gurgenidze. He was giving me direct access to the archives he had. Nana Alexandria and Nona Gaprindashvili were helping me too and finally I found leftover footage in the documentary archive “Mematiane” that was more personal than the other sources.

In a coral film like yours, sometimes the story doesn’t stop enough in certain characters we might expect. Why did you prioritize approaching the whole group of women instead of focusing on one or two figures?

The four protagonists were (are) the best chess players of my country, and of the world, during the Cold War Era. Memory about them is fading out. Like in Florence of medieval times where Michelangelo, Leonardo and Raphael were living and working, Tbilisi -capitol of Georgia- was the place where Nona, two Nanas and Maia lived while tree decades of their dominance, from 1962 to 1991. Competitors on the chess board, they were playing as one team and were companions. Their “love and hate” relationship as well as the social dimension of their phenomenon was rather fascinating to me, than a biopic about one of them.

In a certain scene, we hear how kids are under strong pressure when they play chess, but later we see their interest in competition, or training in academies, is still growing. How do you see this aspect of chess?

Strong pressure and interest in competition seem logical to me, in chess context. In the film, Maia and Nana Ioseliani underline the skills chess can improve in a young person, but I think they -especially Nana Ioseliani- are also aware of the damage competition can cause in them.

Nowadays, I think pressure and competition in chess has reached a higher level. Tools and materials for training are more advanced and the player’s talent is no longer the driving force.

Did you, in any moment, think of asking them to play against each other again? Like a “rematch duel”.

The film shows how these women inspired so much to their fellow Georgians. We would like to know about how the public reacted to the documentary, especially in ex-Soviet countries, and between male audiences. We know that kind of society was pretty much male-centric.

Glory to the Queen was premiered at the festival CinéDOC Tbilisi, Georgia, in September 4th, 2020. The premiere went great but the film didn’t make her way in cinemas due to the pandemic. We planned to show it worldwide and also in ex-Soviet countries, but we have to wait until cinemas re-open. Then, I will know more about the public reaction.

For the moment Glory to the Queen is taking part on international film festivals. It received the Audience Award at the Free Zone Film Festival in Serbia, and is nominated for the Romy Award in documentary in Austria, which is also an Audience award. I hope one day it will be also screened in Peru.

In Peru, we actually have a relatively strong tradition in chess, but this is mostly focused on male players. Is it the same in ex-Soviet countries in current days? Do you think your film will help us interest more in female chess players worldwide?

I am not sure how is in other ex-Soviet countries, but in Georgia chess is till now a female dominated game. I see it already happening, that Glory to the Queen provokes interest for female chess players worldwide (with the help of Netflix “The Queen’s Gambit”, where Nona Gaprindashvili is also mentioned, and of course because of chess popularity in times of lockdowns). But the the film is not just about winning and losing on the chessboard. It is a cinematic reflection on how women’s struggle for independence and how this struggle echoes in individual and collective life stories.

Finally, are you working on a new project currently?

I am thinking about making a hybrid documentary film about a murder. The story would start while shooting Glory to the Queen, as the events happened in real life. I knew the person who was murdered and I have some inside informations from him. About the approach for the film, there are two ways to follow: a political murder or a murder related to some morbid admiration/homoerotics (sort of like in some Claire Denis’ films).

The interview was done by Alberto Venero Torres, in May 5th, 2020, via email.